Getting around Hanoi has all the fun of any big city but without all the regulations and rules.  People are polite but assertive.  All kinds of vehicles share the entire road and lanes are a suggestion only.  It feels free and fair because you have to use common sense and kindness and not rely on the state to tell you what to do.  It’s more democratic than any democracy I’ve visited.

The only thing mildly disturbing is the exposed electrical wiring.  It’s looking too late to put it all underground.

A pushbike is a must as you can travel around freely without helmets.  And there are no fun police controlling your every move and what you wear when you ride a pushbike in Vietnam.

Dodging motorbikes carrying up to 5 people with sleepy babes in arms and girls wearing a mix of Chanel and chenille is a game I enjoy.

DOWN TO BUSINESS
Carbon paper is still used when a business needs to keep a copy of a document.

And copying is one of the skills SE Asia is famous for.  Taking all the branding of McDonalds, they created Lotteria.

The worst thing a foreigner can do is lose their shit and yell.  It slows down the process of solving the problem as the locals will watch you with the patience of a parent waiting for a tantrumic toddler to calm down.

I watched three large-boned Israelis bully a tiny local girl washing their feet.  She couldn’t guess their nationality by their accent so they warned her she had one more go to get it right.  In a timid voice she said, ‘German…?’

And before World War 3 broke out, I chimed in, ‘I was going to say ‘German’.’

The big one said, ‘do we look German to you?’

Annoyed now, the big one said, ‘I’ll give you a clue.  We’re from the Middle East.’

I didn’t get a prize for guessing Israeli.  I just wanted to get this girl out of the hotspot or join her in it and lend a bit of moral support.

Yeah, you can haggle on prices for things and bargain people down.  Don’t do it.  Everything from beautiful food, massages, taxi fares, booze and tours to see the sights is less than 20% of anything you’d pay in Australia.  AUD$1 = VND20,000.  Local currency is called the Dong.  I giggled every time I hit an ATM to get ‘Donged up’.

Vietnam does have a system to look after their differently-abled citizens.  They have opportunities to be creative in meaningful employment in arts for tourists.  I’m not mad on embroidery but these people do turn it into an artform.  Slave labour?  Exploitation?  It’s easy to think that if you are a Westerner.  The English translation of signs seems politically incorrect and they might want to re-think the ‘medicine donation cabinet’.  Maybe that’s just my awful Western caution showing 😉 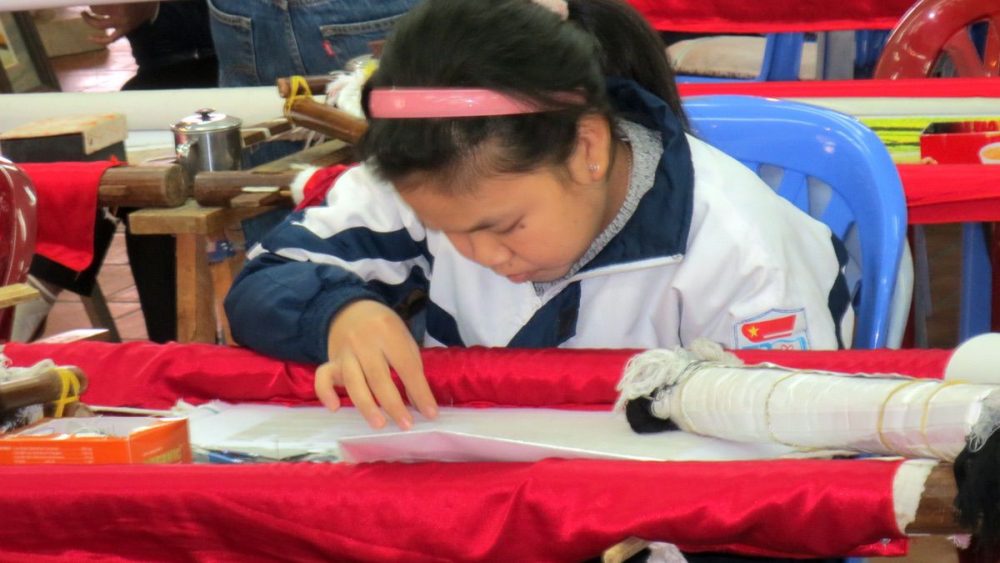 And this is embroidered art.

One incredible taste sensation is eating locally baked bread dipped in oil and salt laced with 5 spice.  Wow.  I will enjoy this simple pleasure for the rest of my life and add it to my regular BBQ seasoning.

Half the people I’m travelling with took turns getting violently ill.  I mean projectile vomitting across ipads, computer keyboards, luggage and themselves.  It got so full on, vomit blocked drains in one of the rooms.

In order to eat anything, anywhere, anytime, it’s a gift to have built up enough enzymes and antibodies to various diseases in your bloodstream so you have an army in your body ready to defend your digestive system.  I am grateful I have that army on my side.

KOTO was a highlight.  This busy eatery is the training ground for street kids who are taught hospitality trades.  The name stands for Know One Teach One.  It all started when a Vietnamese-Australian man returned to his homeland and saw boys living the life he was destined for before he took a boat ride to Australia as a refugee.  So he saved one from a life on the street and gave him a trade.  Now, 600 kids have saleable skillsets and can earn a real living in a trade that can take them around the world.  And it was very moving to see the joy beam from their faces when you let them know how beautiful their food is. 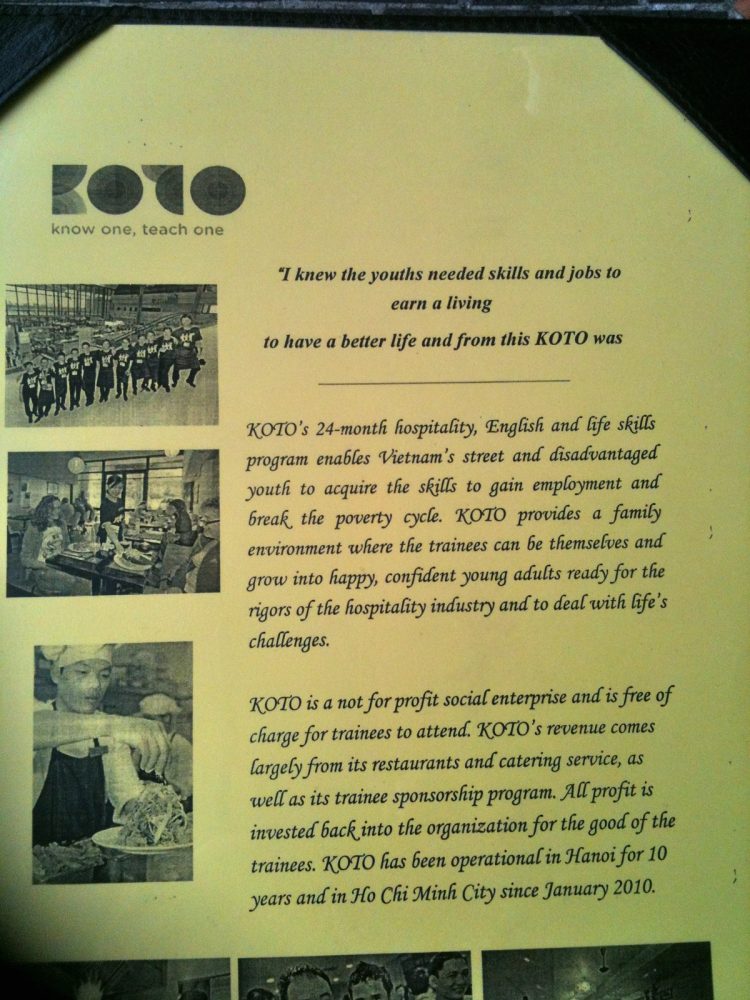 Vietnam withstood 1000 years of Chinese imperialism.
Then at the end in World War 2 in 1946 when the rest of the globe was war-weary, France had a crack at taking over Vietnam.
And from 1964,  the war they call the American War – not the Vietnam War – again proved how their ability to focus and stand their ground pevailed over tech and 20th century weaponry.

I realised that tiny, timid girl who appeared to be at the mercy of 3 large-boned Israelis probably didn’t need my help at all.

The paradox of Hanoi is the mystery and logic of how it all works – that calm chaos is a way of being, a way of life and a path to prevailing over the most war-like circumstances.

See it in action, submit to it and learn a better way to live.