June 6, 2010 paulcush Leave a comment Go to comments I caught up with Renee Brack, host of  The Movie Network Channel, Reporter, Producer and all round Adventurer to talk movies, writing and the current state of Aussie cinema. 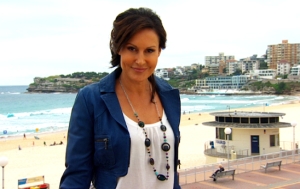 When did you love of movies and all things film start?
It was raining outside so I couldn’t go out and play.  The Great American Beauty Contest was on TV and it was the first movie I remember watching start to finish without any distractions.  After that I wanted a camera.

Did the pen come before the TV or vise versa?
My dad taught me to write when I was 3 years old and I have always written.  TV came to me when I was well into my 20s.  I thought it’d be a short term job but it kept going.

What actor/actress do you run to the cinema for?
None.  But there are some performers I do like – Phillip Seymour Hoffman, Geena Davis, Danny DeVito, Angelina Jolie

Are there any critics you seek out right now, or do you prefer not reading them and staying in your own space?
I prefer to stay in my own space first as I get all the material I need to work with from a screening and some production facts and notes.  If you read other reviews or critiques first, it can colour what you think and what points you want to make.  Then another point of view will flavour the review.

Switching gears, why do you think digital video is embraced as a popular art form?
It looks so much better than the old tape / analog thing.  The movies belong to the people and the people have a keen eye and ear so crisp sound and images are standard now.  At now that movie ticket prices are around $17 we want our money’s worth.  That investment will always mean more to us and than a studio’s $100m investment in a film.

How do you decide what to review? Or, put another way, how do you choose what NOT to review?
Sometimes, a movie doesn’t need any single reviewer’s support – like Sex & The City 2 but I have a lot to say about it’s content, production and message.  Sometimes, it’s because a film won’t get any attention at all if I don’t do something on it that makes me give it my time and energy.  Other times I’ll review films that I really liked or really hated.  I review films that I feel have been misunderstood by other reviewers.

When a book is adapted for the screen do you try to read the book prior to seeing the movie? What about reading screenplays?
I read scripts when I’m on cardio machines at the gym.  A fairly perfect one in terms page-to-screen accuracy is Pulp Fiction and right now, I’m re-reading Trainspotting.

What is your actual reviewing process like? How many times do you watch a movie before writing your first published review of the movie?  What is the most number of times and which movie gets that honor?
It varies – 1,2 occasionally 3 times.  It’s not an honour thing, it’s a time issue.  I rarely have 6 hours to devote to a single movie before reviewing it.

Who are some of your favorite critics and why? And how do you feel about the fact that anyone can write and publish their own reviews on the web these days? Do you view that as a positive trend?
I really liked reading Chris Murray when he headed up Empire, Roger Ebert is sill good value, Georgia Hawkins does solid segs on Sky News, Giles Hardie is insightful with a twist of humour.  Clint Morris is another superb commentator on movies.  Anyone can review and that’s fair and positive – movies belong to everyone and are the modern form of the camp fire story where people learn about the world, see a different point of view on everyday activities and get to visit lives we wouldn’t otherwise get to visit.

Actors are better now than they were just 15 years ago. But are there any out there that are so bad you wonder why anyone hires them?
The acting process has been refined and expanded by lots of 20th century technique and natural ability that has seen the craft rise out of melodrama.  But remember too – acting was seen on a stage so there were no close-ups so subtlety was not a requirement.  The audience up the back need to see the actions and hear the dialogue.  But movies make the experience up close and personal with the viewer so acting has evolved to take that into account.  And when it comes to hiring movies that are good or bad – it’s all a matter of personal taste.  Some people might think The Toxic Avenger is a poorly acted bad film.  I don’t.  And I think the acting in Avatar left a lot to be desired. 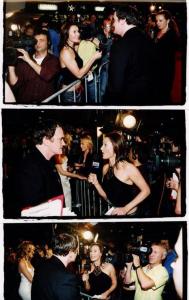 Are there any box office stars like Bruce Willis, or Denzel Washington or Tom Cruise whose appeal you just don’t get?
Well, funny you say Bruce Willis – I love his work soooo much – he’s funny, dramatic and an action star – it’s rare to find such an all-rounder who excels in every area.  We started to see Nicole Kidman do some good work in Too Die For and Malice but after those, she became a high fashion model who appeared to be more concerned with anti-aging and designer gowns than creating a sublimated believable performance so the talent she had stopped evolving.  And Tom Cruise is really doing the right thing by landing and nailing that bit part in Tropic Thunder – Les Grossman is the defining moment of his resurrection in the eyes of the public.  Les made Tom cool again.

What’s the first movie that you remember seeing?
The Great American Beauty Contest. Don’t hold that against me.  It was a pretty deep and dark mystery for an 8 year old to understand.

Is there a particular film which you feel is criminally underrated?
Where do I start?????  Most recently – The Losers – some people complained about plot holes but they missed the point of the genre.  That’s like saying Avatar fails as a documentary.  That’s cos it ain’t a doco.

Which director do you feel has turned out the best overall body of work?
Scorsese consistently makes watchable movies that have depth and great entertainment value.  Soderbergh is another who can make movies fast and with sharp points of view.  But the best overall?  Ahh Cushhy Paul – that is much too hard a question.

Time to look into the future. Do you predict any major changes for the movie industry over the next 25 years?
The backlash against the size of movie food and the price tag.  Cinemas will have to respond to public desire after a while.  I shall be involved in that revolt.  3D has arrived and will only get better thus elevating the movie experience to that of the ‘feelie’ like in Aldous Huxley’s Brave New World. Now THAT is the revolution I’m waiting for!  Imagine the movie experience when you can feel what’s happening on the screen!

Here’s another chance to predict the future. Name a relatively unknown actor or actress who’ll be a huge star within five years.
James Frecheville – smart, understated and unintimidated by his tender 17 years and 1 only feature film (Animal Kingdom) and someone else I just love watching on screen – Mark Strong (Kick Ass, Robin Hood) and from New Zealand – an actress who just soaks up the screen is Emily Barclay.  Your eyes gravitate to her no matter who else is in that scene.  It’s a quality that can be good and bad – depending on whether she decides to use her powers for good or evil and whether she can harness that power.  She doesn’t mean to steal scenes – but it happens and only she can bring that under control.

Is there something in you screaming in you to let the Australian Film Industry know?
Don’t release a film here without any international PR first.  It’s just crazy to expect and fat opening box office weekend when the Australian public is mistrustful of what kind of movie they’re actually going to get.  Yes, it’s hard to get pre-sales overseas without a release here first but there’s nothing stopping filmmakers entering in festivals first and riding the tide of resultant PR back here for an Australian release.  Animal Kingdom won a significant prize at the Sundance Film Festival and look what that has done for the film’s opening box office weekend here.

What is next for Renee Brack?
Got a full plate with Movie Network Channels.  Much writing is on my slate too along with cutting up doco material from the Middle East and FNQ.  And getting this Q&A to you Cushy before I head into the Sydney Film Festival and watch The Tree. It got a 7 minute standing ovation at the Cannes Film Festival.  I want to find out why

More of Renee’s movie review scribblings can be found atreneebrack.wpstagecoach.com 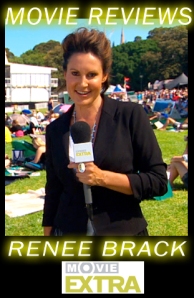