If Free-To-Air (F2A) tv channels want to at least pretend they are having a serious go at moving with the times and if they value shareholders’ investment, they need to ban ads during narrative TV content.

It’s a hard lesson networks just don’t learn: a story is an emotional journey told in a steady stream without interruption.

When you jerk people out of that stream with loud ads, it’s like being told a story by someone with untreated extreme ADD.  I reference Homer Simpson when he was mid-sentence and interrupted himself with: ‘Ooooo look!  A dog with a fluffy tail!’

TV exex haven’t accepted or perhaps even grasped that BingeTV is a real consumer trend and it’s been happening since the Dawn of the Download.

It amazes me that F2As haven’t had a radical ‘re-think tank’ of the old-fashioned way advertising breaks into today’s TV viewing.  It’s a break-and-enter into our concentration on some content and it should be illegal.

Take a leaf out of the playbook of home shopping channels around the world.  People watch them.  They buy from them.  Create smaller versions around quality programming instead of diluting the quality by choking it with noisy visual weeds.

It’s worse than being overun with triffids.

Create a worth-watching package of advertising with rewards and treat is as a break between narrative emotional journeys.  If the main character dies in the end – lead with funeral insurance ads.  If they live happily ever after – lead with an ad about a deal on buying a home.

At least have a go at getting out of the advertising rut FTAs force themselves into along with their clients and us, the content consumers.

There are better ways to group content.  Viewers are canny enough to block the ads out – without even leaving the room.

Frequent interruptions might have served 50s styled variety programs as well as some narrative content where deliberate minor cliff-hangers have been inserted to allow for the tedious unrelated advertising content.  But on the whole, ad breaks do not suit narrative content. 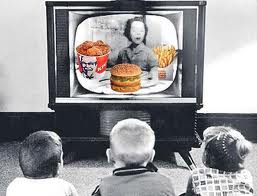 Kids learn to focus and concentrate by getting immersed in something.  Keep distracting a kid from something over time and it’s not rocket science to see learning difficulties and frequent bouts of boredom set in as they miss out on getting a real understanding of how something works or what is going on around them.

Forget Teflon or red cordial.  A diet of TV with ad breaks may be the real cause of worldwide ADD.

The reason people agree that ‘story rules’ when it comes to writing, is because it’s about timing and an emotional journey.  We stay in each moment, carried into the next moment with feelings that are shaped by the moment after that.  And it’s a beautiful thing.

Free to air TV programming with ad breaks is like trying to consume something with an annoying child constantly interrupting with loud demands for stupid things irrelevant to the journey.

Perhaps if advertising was assembled in blocks at the top and tail of narrative shows and movies with an added incentive to watch the advertising, everyone would be happier – consumers, TV exex and advertisers.

But what would I know?  I’ve only been in TV since 1991 participating in every major evolutionary media step since the brick-sized mobile phone. 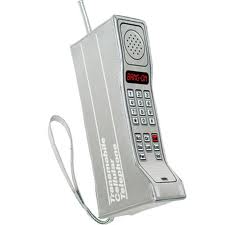 And stick it somewhere else.  Stat. 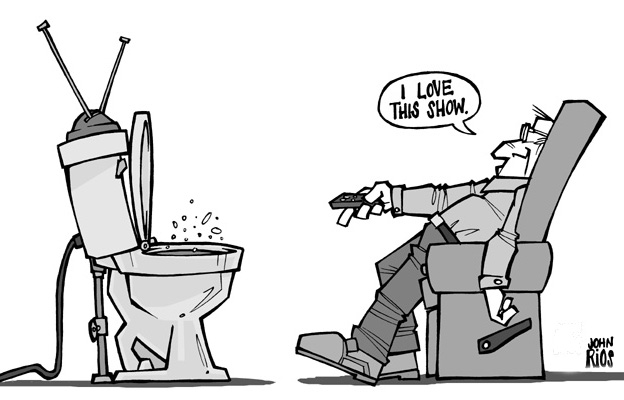