Arguably the biggest film of the decade – Star Wars The Force Awakens .  I produced with a great crew – shooting content for global social at the Sydney Opera House Fan Event – now gearing up to produce segs for Disney of the December 17 premiere in Aust (Dec 18 for the rest of the world).

Luke Who-walker?  Promotion for the latest film is all about Han Solo aka Harrison Ford.

A highlight for me was the DJ who looked like the offspring of a Blues Brother mating with a Stormtrooper. 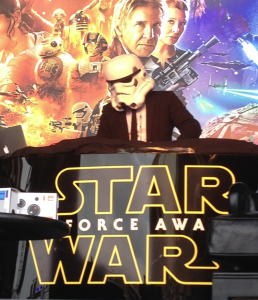