SBS News – Sledging VS Bullying
Q  If sledging in sport is okay and even considered a strategy to win, why aren’t they teaching it in schools?
A  Because it’s bullying.
This article stirred up great commentary on social.

Sails and Offshore Magazines – Miss Minx: A Holiday Home With No Fixed Address
A story about a beautiful Hanse yacht called Miss Minx because sailing is sexy.

SBS News – Hot Chip Vending Machines Soon To Be On Street Corners
The concept is both amusing and horrifying.  A great surge in Facebook social commentary about this topic focused on the resulting rise in rats and cockroaches that would love hanging around the machines and – getting inside them.
I also proposed that a Super Vending Machine that is a combination of an oven, fridge, freezer, microwave and pantry would replace the common kitchen – imagine re-claiming that all that space!  (BTW – these super-vendors exist now.)

Testimonial:
“Mostly it’s because I didn’t just want ‘someone’ to look at my script, it was your personal style, the ability to see things others don’t.  I don’t know how many Hollywood actors I’ve witnessed stopped in their tracks with your questioning. They scratch their heads, usually grinning from ear to ear, and actually have to think of an answer rather than just rattle off the generic movie junket list of typical responses.”  David Tottle 15/3/13

SBS News – Can Dance Save The World?
When I saw the trailer for the documentary Dancing In Jaffa, I was motivated to write a piece about the possibility of dance moves bringing more peace to the world than military manoeuvres.  The doco focuses on Israeli and Palestinian kids getting past spitting at each other and covering their hands to avoid skin-to-skin contact – in order to learn patience, discipline, kindness, how to work together towards a common goal then share the credit and applause.
Could a young, dancing generation end generational conflict in Gaza?

Testimonial:
Hey Renee. You would have to be the most underrated journalist in Australian history.  WINSLOVE1

Get Up And Go Magazine – Bear Keeper For A Day
Since I was a kid, I have loved bears so I began following the plight of Sun and Moon Bears in SE Asia.  I went to Cambodia to see what I could do for them.  This article is about a wonderful activity you can do for a day that will give you moving memories to last a lifetime and it’s an inexpensive way to contribute to the care for these beautiful rescued bears.

news.com.au – The Chopper Letters + Video Interview of RB with footage from that first TV Interview Starring Mark Brandon ‘Chopper’ Read
During a clean-out, I discovered the old Chopper file from my Hard Copy days.  Inside was my police report, a xmas card from Choppper, 18 hand-written letters from Risdon Prison and the brass cigarette lighter engraved ‘Mark Chopper Read 1000%’ he gifted me at the end of the interview we did in 1992.  I decided to put them all up for auction to go to a Chopper fan or collector of contemporary criminal memorabilia.  The lot sold for $2500 to a little old man and a little old lady – not the types I had expected to bid.
Got some extra funds for my 2 favourite charities – the Shitbox Rally and the Free The Bears fund.

mamamia.com.au – In The Dream, He Would Feel His Legs Again And Stand Up
I’m again happily MCing the SpinalCure Oscars Luncheon and telecast at the Ivy Ballroom on Monday March 3.  I wrote this piece inspired by an incredible businessman, sportsman, playboy and now paraplegic.  The cure for spinal cord damage is very close.  I’m hoping it is in our lifetime.  To reconnect quad and paraplegics with their limbs and help them out of wheelchairs will be medically momentous and emotionally triumphant.

RLTV – Blissful Bali – A Sanctuary For The Solo Traveller
I was invited to spend a week at Bliss Sanctuary For Women and experience a unique way to travel alone, be indulged and pampered as well as have every concern about solo travel stripped away.  It was great to be free of organising transport by having 24/7 exclusive drivers, massages and treatments every single day, a full a la carte menu 3 times a day plus free access to a fully stocked fridge, fantastic day trips, bike tours and challenging activities – truly blissful 🙂

Ocean Media – Sails and Offshore Magazine: ‘Home & Away’ 7 Star Luxury Catamarans With Ever-Changing Stunning Views.
I was happy to write the feature story but landing the cover is a bonus.
And I have my 1st Pacific Sailing School Certificate – Crewing. 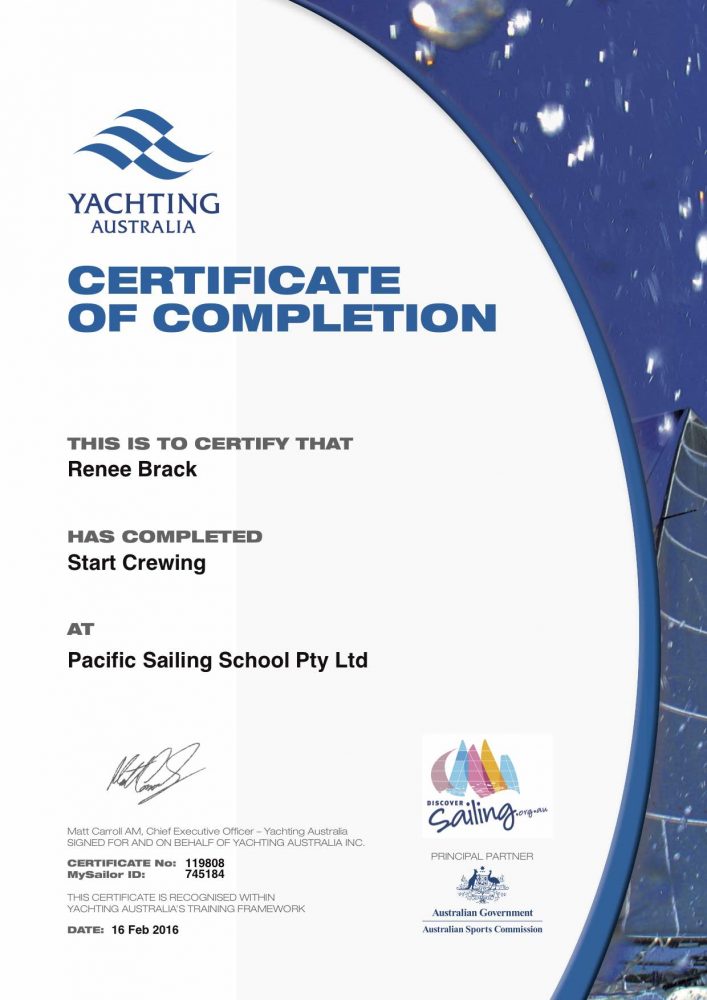 I wrote 3 stories for Sails and Offshore Magazines about the Extreme Sailing Series (ESS) that had Olympic and champion sailors competing on super fast cats all mourned the world with the final deciding heat on Sydney Harbour in December 2015.  Awe-inspiring skills, bone-crunching collisions, monumental celebrations as the winners took all made the series the ‘Formula 1 Of The Sea’.

SBS News – Here Come The Boozeday Preppers
With new laws both state and federal trying old-fashioned prohibition-styled tactics to curb the problem of alcohol-fuelled violence, we’ll see new social issues arise just like they did in the 1920s.  Life will get more tragic because laws deal with  people once they are drunk and exhibiting diminished capacity.  We need to tackle the problem at the source – why is getting smashed seen as the goal of going out?  People have forgotten or are no longer being shown how to have fun and add alcohol as an optional extra.  They meet up to drink up and mess up.

SBS News – Web Junkies – What Do China’s Internet Addiction Rehab Camps Say About Modern Life?
I call them Gulags For Gamers.  China’s one-child policy has created a wave of lonely kids finding other kids to play with the only way they can – online.  China is the first nation to declare web addiction a disease.  Are they pressuring families to repress online usage in the home and sanctioning re-education camps for those who are deemed web junkies?Are kids being punished for playing with other kids?

The New Daily – When Can You Tell An Award Winning Actor Is Being Real Or Fake?
If they are already as good as an Oscar says they are, what are the telltale signs that reveal when an actor is performing sincerity or being truly sincere?

Sydney Morning Herald – Life & Style – Champagne Is Good For The Brain
Turns out 1-3 glasses a week might help ward off brain diseases such as Dementia so pop the corks and celebrate!

SBS – Imagine If Nelson Mandela Was Jesus & All The Christians Missed The Second Coming Of Christ?
This generated much heated social media discussion.

SBS – Capitalist Xmas
Let’s see Xmas for what it really is – not a holiday but more work as a full time consumer.

The New Daily – Introverts V Extroverts
Now the era of geek chic is passé, the rise of the Introvert will usurp the dominance of the Extrovert personality.

The New Daily – Heterochromia Is The Sexiest Mutation A Face Can Have – These Celebs Are Proof
We live in a world where lots of things look good when they match – earrings, shoes, breast implants – but not when it comes to eyes.

SBS – Human Rights Day
December 10 is just as worthy of celebration with cards and gift giving as any other annual day.

SBS – Sectionalised Virginity Based On Body Parts
Virginity is changing and you can give away portions of it in the modern world according to body parts.

SBS – Aust Needs A Bill Of Rights
With laws being passed in Qld casting a wide net and criminalising the innocent, it’s time the people reminded the government of the true meaning of democracy.

SBS – PG-13 Gun Violence
The 007 movie Skyfall was the 2nd highest grossing film of 2012 and managed to score a PG-13 rating for most of the world.  What is the acceptance of active gun use in family-friendly films doing to a generation of kids?

The New Daily – The Art Of The Star Interview
A sketch of personal experiences interviewing the big names of the world over 20+ years.

SBS – Furkids
Would you rather sit next to a well-behaved pet on a plane or in a restaurant than a badly-behaved child?

SBS – Chopper – A Reflection On The Criminally Inclined
Being the first journalist to put Chopper Read on national TV, it was fitting to come full circle and write an obit on this real-life ‘gangstar’ who had an award winning movie made about his life and crimes – and launched the acting career of Eric Bana.